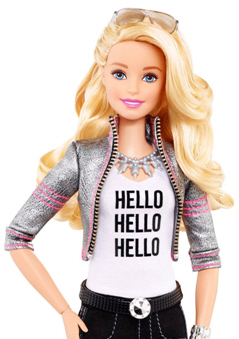 78 new Barbies will hit retail shelves by the end of the year.

Barbie will be a lot more vocal — and also feature greater diversity — in 2015, as Mattel aims to make the underperforming iconic doll a more popular item in girls’ toy boxes.

The toymaker debuted the toy company’s latest Barbie plans at New York Toy Fair this week, an event that’s meant to give retailers, journalists and analysts an early look at what’s to come from the toy industry later in the year. The line includes a talking doll, called “Hello Barbie,” and a diverse range of Barbies that feature dolls with African-American, Asian, and mixed race features.

Barbie’s new look, which also included superhero themed assortment, comes after Mattel has reported three years of declining sales for the doll. Sales have been pressured by the success of Disney’s “Frozen” line. Weak sales of Barbie and Fisher-Price, as well as a poor stock performance in recent years, led Mattel to oust its chief executive earlier this year.

Mattel had hinted late last year that diversity would be a major theme in its upcoming doll lineup. Richard Dickson, a co-president at Mattel and the man that previously ran Barbie during her heyday, admitted to analysts that Barbie had lost her way. He said the superhero line will stand out in a sea of princess themed dolls, while the diversity of the new line “represents the world girls see today.” 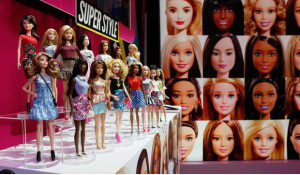 By the end of the year, 78 new Barbies will hit retail shelves, with an initial line that includes 23 looks that Mattel says is far wider range than in years past. There are eight different skin tones and 14 different hairstyles throughout the collection. The line also features bendable ankles for the first time so the doll can wear flats.

The diverse range is perhaps a sign of the changing times, as the iconic blonde doll might not resonate with all of today’s American girls. Diversity among American children is far greater than the population as a whole, so Mattel is making a more aggressive move to address the changing demographics of the main market it serves.

Another notable Barbie that Mattel showed off was “Hello Barbie,” a doll that has the ability to talk. Mattel had explored the idea of a talking Barbie for years, saying it is a top request from girls. It partnered with San Francisco startup ToyTalk to make the doll, which through a cloud-based app can improve conversation over time. For example, on Christmas Day Barbie could ask a child what they received from Santa.

“The idea of conversational play is something people have imagined for a long time,” said ToyTalk founder and CEO Oren Jacob.

Jacob, formerly chief technical officer at Pixar, and his team were behind the software side of Hello Barbie, while Mattel was responsible for the look and the design of the doll. Mattel said it is planning to partner with startups such as ToyTalk to infuse tech into toys, a savvy strategy after some missteps by Mattel and others in the industry to react to the smartphone and other gadgets that have lured children away from playing with traditional physical toys.

“We are thrilled to be a part of letting girls talk back and forth with their dolls,” said Jacob.

The idea of a talking doll isn’t revolutionary. Chatty Cathy did it in the 1960s, and Teddy Ruxpin was a notable talking bear in the 1980s. But both were limited in their ability to actually converse with children, and Mattel thinks this Barbie spins the idea of conversational play forward.

Still, Barbie can be a bit of a yes man (or rather, a yes woman). Tell her you like Central Park and she responds: “Central Park is my favorite place in New York City. I like to wander around the park and get lost.” But she learns over time. If a girl were to say something nonsensical, Hello Barbie would pivot and reference an interest the girl expressed in an earlier conversation.

The price for the doll is a bit steep, with a suggested retail price of $74.99, although Mattel said the price could change when the doll debuts later this year.